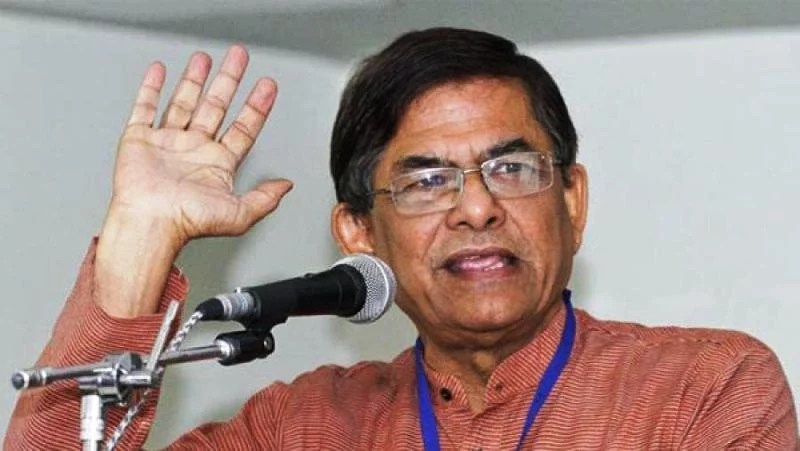 Banglapress Online: BNP on Wednesday alleged that its chairperson Khaleda Zia has been undergoing a terrible ordeal in Old Dhaka Central Jail as she has to use hand fan and candle due to frequent power outages amid sultry weather.
Besides, party secretary general Mirza Fakhrul Islam Alamgir at a press conference at BNP’s Nayapaltan central office said Khaleda is being served with badly cooked food in the jail, though she is sick.
‘Our leader (Khaleda) cannot overcome fever and breathing problem due to damp condition in the jail, sultry weather, and lack of pure drinking water and uninterrupted power supply,’ he said.
The BNP leader further said, ‘Power outage is taking place in the jail repeatedly forcing her to use hand fan and candle. The government’s such inhumanity and unkindness is incomparable.’
Mentioning that fever has long been affecting her every night, Fakhrul said it is an alarming sign even for a healthy person.
The BNP leader said they have got that the latest information about their chairperson from her relatives who met her on Tuesday.
Despite being a former prime minister, he said Khaleda Zia cannot avail of the facilities of a first-class prisoner in jail. ‘Even, the common prisoners can bring many things for them from outside with their own expenditure. But our leader is not allowed to do so.’
The BNP leader said Khaleda Zia is not getting minimum facilities in jail to remain healthy and recover from her illness.
He said though the physicians advised giving physiotherapy to Khaleda, the government is yet to ensure it.
‘The cooking quality of the food she is being given is very low while her family members are not allowed to send food for her,’ Fakhrul alleged.
He said they have got tired of telling that the government has not been showing minimum human attitude towards Khaleda, but there is no change in its stance.
The BNP leader alleged that a file of the jail authorities with the recommendation of taking Khaleda to a specialised hospital was sent to prime minister via the home ministry. ‘The prime minister is yet to take decision on it.’
He said many people from home and abroad requested Sheikh Hasina to ensure proper treatment and bail for the BNP chairperson, but she still did nothing in this regard.
Fakhrul said the family members who met Khaleda on Tuesday said she is unable to walk while the condition of her left hand is very bad.
Besides, he said, her neurological problem has worsened further alongside arthritis and back pain.
Under the circumstances, the BNP leader said she needs to undergo some crucial medical tests, including MRI, at a specialised hospital like United Hospital.
He alleged that the government is trying to keep Khaleda in jail until the next election in December creating obstacles to her release on bail.