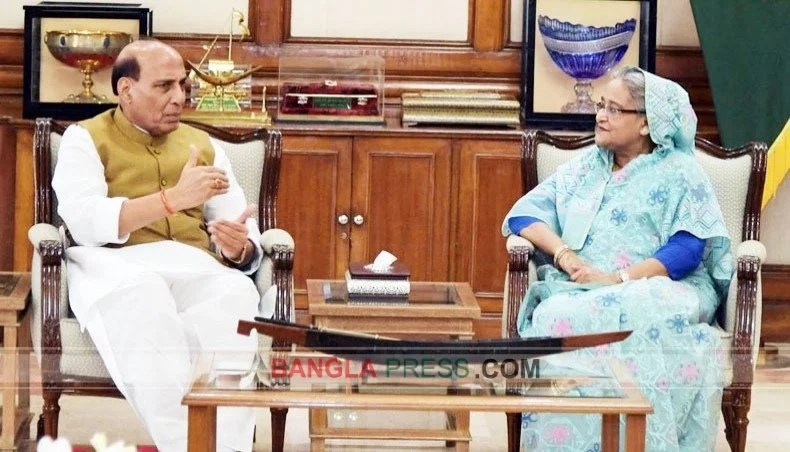 Banglapress Online: Visiting Indian Home Minister Rajnath Singh greets Prime Minister Sheikh Hasina at the Gono Bhaban yesterday morning. Photo: PID
Prime Minister Sheikh Hasina has reiterated that Bangladesh doesn’t allow its territory to be used by any terrorist, terrorist group or entity against any state or people, and always favours resolving any issue with neighbours through talks.
During a meeting with the visiting Indian Home Minister Rajnath Singh at her official residence Gono Bhaban yesterday, the PM said Bangladesh strongly condemned terrorism and violent extremism in all forms.
“In line with its zero-tolerance policy against terrorism and violent extremism, Bangladesh doesn’t allow its territory to be used by any terrorist individual, group and entity against any state or people,” she said.
Stating that Bangladesh is in favour of holding dialogue to mitigate any problem, she said, “We’re always in favour of holding dialogue to mitigate any problem. We’ve resolved many issues like the land boundary disputes through this process.”
The PM’s Additional Press Secretary M Nazrul Islam briefed reporters after the meeting, which was also attended by Bangladesh’s Home Minister Asaduzzaman Khan and other top officials of both countries, reports UNB. After the meeting, Singh said on his Twitter account he had an “extremely fruitful” meeting with the Bangladesh premier.
“Had an extremely fruitful meeting with the Prime Minister of Bangladesh, H.E. Sheikh Hasina in Dhaka today. We discussed a range of bilateral and regional issues of mutual interest,” he tweeted.
Addressing a ceremony at the Bangladesh Police Academy in Sardaha, Rajshahi, yesterday afternoon, Singh praised Hasina’s zero tolerance policy towards the terrorism, saying it was an inspiration for all.
He said India and Bangladesh joined hands to fight the forces of instability and terrorism, reports our correspondent in Rajshahi.
Singh said the spread of radicals and extremists posed a ‘grave threat’ not just to India and Bangladesh, but to the entire region, and expressed India’s determination to stand by the Bangladeshi people in the country’s fight against terrorism. “We have excellent cooperation between our security agencies that ensure that peace, security and development for our people and for the region remains central to our engagement,” he said.
Rajnath emphasised regional dialogue as a means of eliminating terrorism and militancy from this region. “But, for non-cooperation by some of the countries, it is not taking place,” he said.
INDIA COMMITTED TO HELP RETURN OF ROHINGYA
Touching upon the Rohingya crisis during the meeting, Singh said India was committed to extending help for the safe, speedy and sustainable return of Rohingyas to their homes in Myanmar, reports UNB.
India is working on a project to construct prefabricated housing in Rakhine State to meet the needs of the displaced persons, he said.
Sharing the outcome of the meeting, the Indian High Commission in Dhaka said India would also continue to provide relief material and supplies to help the government of Bangladesh to deal with the needs of those in the refugee camps.
Briefing reporters at Gono Bhaban, M Nazrul Islam said Hasina shared the state of the country’s socioeconomic development during the Awami League government and its importance on development of rural areas.
The PM said Bangladesh achieved 7.78 percent GDP growth as the main target of the government was to build a self-reliant golden Bangla as dreamt by Bangabandhu Sheikh Mujibur Rahman.
Recalling her meetings with Indian Prime Minister Narendra Modi, Hasina described her last meeting in Kolkata as a fruitful one. Singh mentioned that the cordial relation between Bangladesh and India is now at its peak.
Rajnath highly appreciated the socioeconomic development of Bangladesh, especially the achievement of a 7.78 percent GDP, under the leadership of Sheikh Hasina.
“Probably, this is the highest and fastest GDP growth in the world,” he said. India-Bangladesh Friendship Building Inaugurated In the afternoon, Singh and his Bangladeshi counterpart Asaduzzaman Khan inaugurated the India-Bangladesh Friendship Building at the Bangladesh Police Academy in Rajshahi.
Modi and Hasina had jointly laid the foundation stone of the building in 2015.
According to Police Headquarters, the construction of the 28,000 square feet building started in August 1 last year, and the work is around 55 percent completed now.
The four-storey building will house a mock police station, mock crime scenes, forensic laboratories and information technology centres with computer laboratories to train police officials. The Indian government provided a grant of Tk 11 crore for the construction of the building.
Singh said the initiative would help foster bilateral security collaborations and its objectives were to impart improved training to Bangladesh Police and assist them in creating a more professional force.
The ceremony was attended by the State Minister for Foreign Affairs Shahriar Alam, Public Security Division Secretary Mostafa Kamal Uddin, IGP Mohammad Jabed Patwari and Indian High Commissioner to Dhaka Harsh Vardhan Shringla, among others.
Singh and Asaduzzaman also attended a Memorandum of Cooperation (MoC) signing ceremony. Nazibur Rahman, principal of Bangladesh Police Academy and Doley Barman, director of Sardar Vallabbhai Patel National Police Academy in India’s Hyderabad, signed the memorandum.
Singh said the MoC would facilitate exchange of trainers and trainees between the two institutes and further deepen cooperation and camaraderie between them.
“Our bilateral cooperation is based on mutuality of interests and a win-win formula for both countries,” he said. Singh, who arrived in Bangladesh on Friday afternoon on a three-day visit, is scheduled to leave for India today.