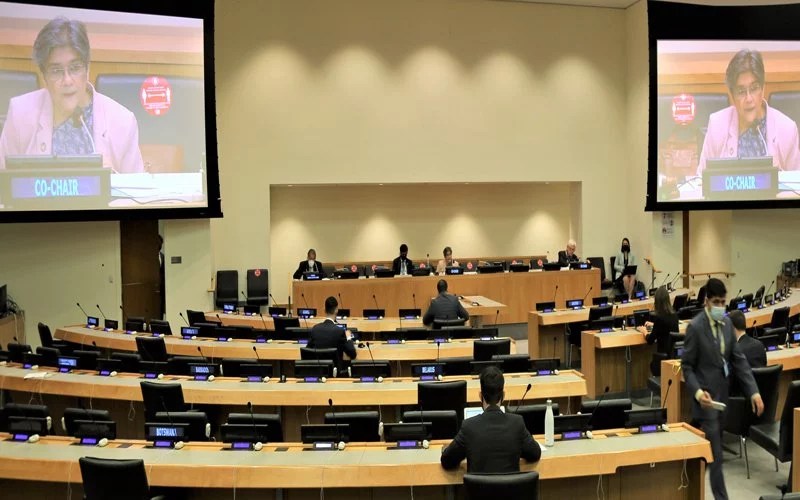 Staff Reporter : A meeting of the preparatory committee for the fifth LDC conference has been held at the UN headquarters. The meeting was jointly convened on Monday (May 24) by Rabab Fatima, Bangladesh’s Permanent Representative to the United Nations, and Bob Ray, Canada’s Permanent Representative to the United Nations. The permanent representatives of the two countries were elected joint presidents at a meeting held on the occasion of the conference in February this year. The Fifth Least Developed Countries Conference will be held in January 2022 in Doha, Qatar. This information has been revealed from the press release sent by Bangladesh Permanent Mission to the United Nations in New York.
The LDC-V conference is envisaged to be one of the biggest UN conferences in 2022. The next programme of Action for the LDCs is expected to come up with a new global compact to address both the immediate and structural issues of the LDCs. As a Co-Chair, Bangladesh will also have the opportunity to move forward some of its key priorities including sustainable graduation and international support measures for graduation. Notably, UN recommended Bangladesh to graduate from the LDC category in February, 2021.
The President of the Republic of Malawi Lazarus McCarthy Chakwera joined the meeting virtually as a keynote speaker in his capacity as the global Chair of the LDCs. As the host of the LDC-5 conference, the State Minister for Foreign Affairs of Qatar Soltan bin Saad Al-Muraikhi also delivered a keynote speech. Among others, President of the UN General Assembly Volkan Bozkir, President of the ECOSOC Munir Akram, UN Deputy Secretary-General Ms. Amina J. Mohammed OECD Development Assistance Committee Chair Ms. Susanna Moorehead, and USG, OHRLLS Ms. Fekitamoeloa Katoa Utoikamanu, spoke at the meeting.
The General Debate was addresses by a large number of Member States including important development partners, who highlighted serious consequences facing LDCs due to the pandemic and expressed solidarity and partnership towards an ambitious 10-year Programme of Action for the LDCs.
Highlighting multidimensional challenges posed by the COVID-19 pandemic to the LDCs, Ambassador Fatima identified access to COVID-19 vaccines as the top priority for the LDCs. She said, “ if this issue is not addressed immediately, LDCs will face serious humanitarian and economic misery for years to come. ”
She stressed the need for an incentives-based graduation package for the graduating and graduated countries from LDCs as they are at a high risk of sliding back—both by the COVID-19 impact and the loss of LDC specific support measures.
Among other things, she also underscored the multidimensional challenges and vulnerabilities faced by the LDCs in the areas of poverty and inequality, trade, climate change, external debt, migration and remittances.
This meeting sets in motion the substantive work for the LDC5 Conference to be held in Doha, Qatar in January 2022. It will continue through the week. Bangladesh Foreign Minister Dr. A. K. Abdul Momen, M.P. and Information and Communication Technology Affairs Adviser to the Prime Minister Sajeeb Ahmed Wazed are expected to participate in different thematic sessions of the meeting later this week.

Noman Sabit: Sheikh Hasina said that the Rohingyas have been living since the 8th...