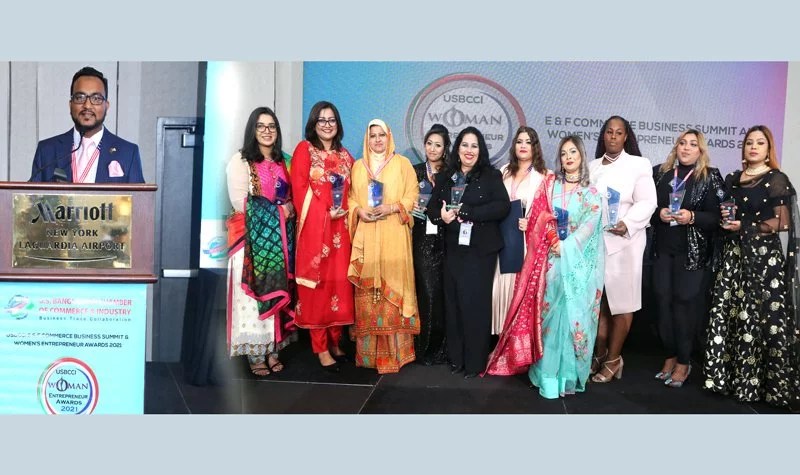 In his welcome speech, US Bangladesh Chamber of Commerce and Industry (USBCCI) President and Chief Executive Liton Ahmed said,
We are all gathered here in the region and beyond to celebrate the achievements of Women Entrepreneurs Day. Today’s Summit provides a platform for new entrepreneurs to train and receive information in an interactive way for different audiences on how they have worked towards achieving their careers and personal goals. Today’s event has given participants a chance to get acquainted with various professionals and also discuss the issues they need to be successful. This summit will connect new women entrepreneurs with their next mentors, friends and clients.
The US Bangladesh Chamber of Commerce and Industry (USBCCI) celebrated ‘Women Entrepreneur’s Day-2021’ in New York on November 20 this year with hundreds of countries around the world.
At present, the presence of women entrepreneurs in online enterprises is relatively high. Because social and family responsibilities and barriers do not become a particular obstacle, women can walk very comfortably in online based initiatives. The role of industry and industrialists in the economic development of a country is undeniable. Industrialization accelerates the economic development of the country by utilizing all the material and material resources of the country properly and to the maximum extent.

According to the World Economic Forum’s ‘Global Gender Gap Report 2020’, different countries in the world have different positions on women’s equality. Even in developed countries, women’s equality has not been fully achieved. According to their report, out of 153 countries, not a single country has achieved full gender equality. Overall, the gender gap has been filled by 69 percent in 153 countries around the world. At the forefront is Iceland, a country that has managed to close the gender gap by 88 percent. Four of the first five countries are Nordic. These include Iceland (1st), Norway (2nd), Finland (3rd) and Sweden (4th). At number five is the Latin American country Nicaragua. Bangladesh ranks 50th in the Gender Gap Index. Among other South Asian countries, Nepal is ranked 101st, Sri Lanka 102nd, India 112nd, Bhutan 131st and Pakistan 151st. In other words, Bangladesh is ahead of everyone here. Not only in South Asia, but also in Singapore (54th), China (106th), Japan (121st) and many other countries; Which is really wonderful and admirable
Acting Consul General of New York SM Nazmul Hasan presented the keynote address at the event. Speaking on the occasion were Mohammad Ahsan, Chairperson, Technology and Innovation Committee, USBCCI, Prof. Hena Siddiqui, Founder and Board Director (AIEUSA), Alif Laila Nabila, Assistant Vice-President (Bank of America), Monica Roy Chowdhury-President, Bangladesh American Women for Progress. , Dr. Sima Kartenya Ambassador, United Nations, Dr. Sima Kartenya-Ambassador, UN, Mary Jobaida-Representative Jessica Ramus New York State Senator, Chief Executive of Sonali Exchange in the United States Debashree Mitra, Chief of Police Transpotech Academy, Dilip Kumar Thankappan President World Yoga Community and closing remarks were made by Abdul Quader Mia, Vice President US Bangladesh Chamber of Commerce and Industry.

Noman Sabit: The 52nd Armed Forces Day was celebrated at the Permanent Mission of...

Minara Helen: Many questions have been raised about the familiar guests who regularly travel...

Reorganization of DU Alumni Association by members, after rejecting incomplete and corrupted voter list by committee

Chhabed Sathee: There have been allegations of irregularities, arbitrariness and abuse of power in...