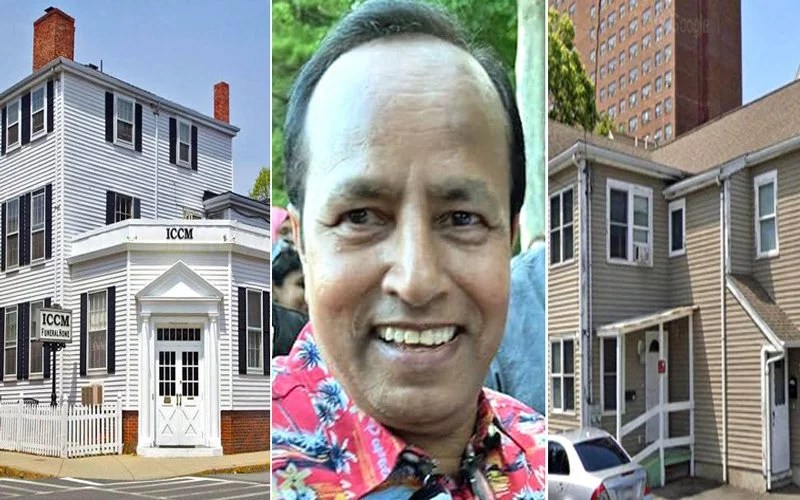 Noman Sabit: Officials of the Bangladeshi-run mosque and madrasa committee have sent a letter of recommendation to reduce the sentence of the lustful leader of the Boston Awami League detained in the Massachusetts state court in the United States.
The Awami League leader of Boston who was arrested on charges of attempted rape of a black woman will be brought to court next Tuesday (November 8) on the day of the mid-term elections in the United States and the final sentence will be announced. As the incident has created excitement among the expatriate Bangladeshis in Boston, anxiety has also arisen.
On October 14, Judge Thomas Drechsler of the Superior Court of Salem City, Massachusetts revoked the bail of the charges of physical assault and molestation against him and arrested Asif Ahmed Chowdhury alias Asif Babu (62) in a deferred sentence and sent him to jail.
Asphyxiation is also alleged in the same complaint.
While the said incident happened while he was the president of Bangladesh Association of New England (BANE) based in Boston, New England, he continued to act as the president of organization BANE by covering it up and avoiding the eyes of thousands of expatriates, which is against the organization’s constitution. After the court sent him to jail recently, when the incident became public, there was a storm of criticism among expatriates in Boston.

Asif Babu is a resident of Medford near Boston. Current vice president of New England (Boston) Awami League (Yusuf-Iqbal) group divided into two groups in Boston. Founding President of the New England (Boston) Sports Club and former President of the New England branch of Nandini, a women’s organization. There were many allegations of molestation against him earlier. He was slapped in public by his own aunt mother in law for the crime of laying hands on his body for a few years. After the black woman was first arrested for attempted rape, her wife also reportedly slapped him and kicked him out of the house.

Meanwhile, some community leaders who are said to be from the Bangladeshi community in Boston are collecting signatures of ordinary people on an application form for a reduced sentence or ‘community service’ in the court next Tuesday (November 8). There have been various reactions among Banladeshis in Boston as they have misled the common people and supported this characterless lasciviousness. The leaders and workers of Awami League of America including New England (Boston) Awami League are ashamed of Asif Babu’s activities. In this regard, the former president of New England Awami League, Yusuf Chowdhury, and the former president of another group, Osman Gani, refused to comment on the matter. Also, attempts were made to contact former General Secretary Iqbal Yusuf and Suhas Barua on phone but they were not available. President of the United States Awami League Dr. Siddiqur Rahman and Acting General Secretary Abdus Samad Azad were sent a text message and asked for their response, they did not give any reply.
Abdul Quader (pseudonym), a resident of Boston, said that the so-called leaders of the Bangladeshi community in Boston have sent a letter signed by hundreds of ordinary people to the Attorney General and the Senator to save Asif Babu, the vice-president of the Boston Awami League, who was arrested on charges of attempted rape of a black woman. Former Awami League worker Abu Kamal Azad (bar tender), Grocery shop owner Humayun Morshed, Shaheen Khan, Alauddin Chowdhury, Kaiser Chowdhury, Tapan Chowdhury, leader of New England Buddhist organization, BANE’s current president Parvin Chowdhury (wife of Asif Babu) and several businessmen. Also, the executive committee of Islamic Center of Rindge in Cambridge Mosque and  a former official on behalf of Islamic Cultural Center of Medford (ICCM) have also filed separate appeals on behalf of the lustful Asif Ahmed Chowdhury alias Asif Babu. The authorities of mosques and madrasas issued such letters in favor of identified and well-known lechers, creating a stir among the Bangladeshi community in Boston. A former president of BANE, who did not want to be named, said, “Some avowed enemies of society today are going to such lengths to save a rapist that it is tarnishing the reputation of our community outside the country, which is never desirable.’
It is known that Asif Babu was convicted of physical assault and molestation of a black woman in Salem City. He contacted her about a room for rent two years ago. Asif Ahmed Chowdhury alias Asif Babu was acquitted by a Salem Superior Court jury of more serious charges including rape as well as strangulation. After a week-long trial, Judge Thomas Drechsler revoked Chowdhury’s bail on Friday (October 14) and ordered him into custody pending sentencing. Asif Babu will be arraigned in court next Tuesday (November 8) for his actions.
The incident of attempted rape a black womanrape allegedly took place in September 2020.The victim, who has been living in the emergency shelter on Federal Street in Salem with her then 9-year-old daughter after she lost her job due to the pandemic and was unable to pay her rent, testified under questioning by prosecutor Kate MacDougall.
While staying there, she searched for a place to live in Medford so her daughter could return to the school she was attending before the eviction, the woman testified, adding that she responded to an ad on Facebook Marketplace for a single room, placed by Chowdhury, and planned to take the room.
Several days later, on September 17, 2020, Asif Babu visited the woman in Salem so she could sign a rental agreement. During that meeting is when the assault took place, the woman testified.
The woman’s daughter told jurors that she was awoken by the sounds of “a lot of chaos” and peeked out of the bedroom to see a man standing over her mother. “She couldn’t get up at all,” the girl told jurors. She backed into the bedroom and called 911 emergency hotline.
Salem Police Officer Jonathan Springer was the first to arrive at the shelter and found Asif Babu struggling with the woman near the door. He separated the two.
Officer Keegan Stokes then arrived and spoke with the woman, who he said was crying hysterically. Stokes told jurors that he noticed that the kitchen of the shelter apartment was in disarray and found Asif Babu’s glasses on the floor.
Defense lawyers Syrie Fried and Benjamin Brooks sought to highlight inconsistencies in the woman’s account to police, her testimony to a grand jury and her testimony at the trial, and pressed her with questions about Facebook Messenger exchanges in which Babu used heart emojis and paid her compliments.
They also suggested the woman started the fight during a dispute over the amount of rent she would pay. “You became angry and hit him,” Fried suggested in a question. “No,” the woman responded.
Fried showed the woman a photo of Asif Babu with scratches on his neck, and the ripped shirt he wore that night.
“I was trying to get him off of me,” the victim responded.
Earlier, on November 9, 2019, during the biennial election of the Bangladesh Association of New England (BANE) in Boston, Asif Babu, a candidate for the president from one panel, and his associates beat up a candidate from a rival panel, leaving him seriously injured. When the help of the police was sought to control the situation, the police reached the spot and stopped the polling. Based on the said incident, Khoka-Nabi-Sami Parishad sports secretary candidate SM Sajjad Hossain filed a case against Asif Babu with the local police. A few weeks later, the case was settled with the intervention of some alleged community leaders in Boston.
Despite allegations of widespread irregularities in that election, Asif Babu was elected president of the Bangladesh Association of New England (BANE) for a two-year term. This year, he appointed his wife Parvin Chowdhury as the president of BANE. He hails from Kattali village under Pahartali Police Station of Chattogram district.