Noman Sabit: American hotel company Marriott Residential Hotel authorities are looking for 8 Bangladeshis involved in the alleged 36th Fobana conference held in Los Angeles, USA. In September of this year, the alleged 36th United States Federation of Bangladeshi Associations in North America (Fobana) conference hosted by 8 Bangladeshis paid a fake check of about 20,000 dollars (about 20 lakhs in Bangladeshi currency) after the three-day cultural event in the name of Fobana conference, which was rented at the Marriott Burbank Hotel and auditorium in Los Angeles. It is said that they are trying to collect their dues through international debt collection agencies without finding any trace of them even in the last four months.
The 8 Bangladeshis wanted by the Marriott Burbank Hotel in Los Angeles are the alleged convener of the 36th Fobana conference Abul Ibrahim, member secretary Syed M Hossain Babu, conference president Zahid Hossain Pintu, chief coordinator Quazi Moshoorul Huda, self-proclaimed chairman of the 36th Fobana conference Atiqur Rahman and executive Member Dr. Rafiq Khan, Host Committee Treasurer Dewan Jamir and Central Committee Treasurer SM Lotifur Reza Tushar. Also Marriott Burbank Hotel authorities are looking for the backstage coordinators of the Fobana conference, former chairman of the 35th Fobana held in Washington DC, Zakaria Chowdhury, convener GI Russell, member secretary Shibbir Ahmed and Bedarul Islam Babla.
It is known that after being kicked out from the original Fobana, these people used the name of Federation of Bangladeshi Associations in North America (Fobana) held in Los Angeles, California, United States. They charged $18,948 dollars and a total of 19 thousand 8 hundred 62 dollars including another 914 dollars for other expenses (about 20 lakhs in Bangladeshi currency) for the rent of cultural program they held in the auditorium of the Marriott Burbank Hotel in Los Angeles and issued two fake checks to pay the amount they owed. When the hotel authorities deposited the check in the bank, the matter came to their notice. Being unable to collect the dues even in the last four months, he was forced to look for check payers. In the end they was referred to an international debt collection agency and that agency is demanding regular payment.
The Marriott Burbank Hotel in Los Angeles found the real Fobana by visiting the original Fobana website and contacted them. But the main Fobana authorities have made it clear to the hotel authorities that they will not take any responsibility for the recovery of the outstanding amount. 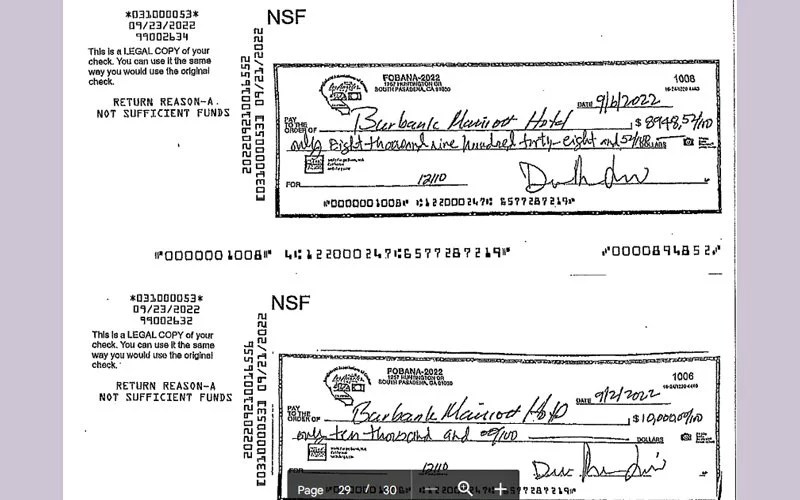 Rafiq Khan was embarrassingly and humiliatingly defeated in an election as Secretary. After that he found no future in Fobana. He considered himself the most cunning person in Fobana by making unauthorized changes to the constitution and bylaws on Fobana’s official website. He changed directors at Fobana’s DC corporate office without Fobana’s approval, which is considered a cyber crime. Kabir Kiran is the joint secretary of the convening committee. He got only 7 votes, Dr. Fobana’s last election as treasurer. Defeated miserably against Manik. Manik got 38 votes.
Rafiq Khan runs an organization together with the couple. He has no future in legitimate Phobana. Kabir Kiran felt the urgent need to join the bogus convening committee to boost his self-esteem after his humiliating defeat in a legitimate election. Zahid Hossain Pintu, the so-called vice-chair of the convening committee, was similarly defeated as an executive member in the Fobana elections. He was expelled for violating multiple Fobana bylaws and constitutions. There have been widespread allegations of cheating with many national and international artistes during his convention in Los Angeles. The failure of his convention in Los Angeles and the misappropriation of funds were widely reported in Bangladesh and the United States at the time. Another elected member of the convening committee, Bedarul Islam Babla, collected thousands of dollars in the name of Fobana along with his brother-in-law Shaheen in his convention in 2015. He too lost the election and got the least number of votes as an outstanding member in the election but only managed to win the term this time with the grace of all the ex-chairmen.
Another member of the so-called convening committee, Zakaria Chowdhury, is a self-proclaimed conspirator and mastermind of the committee. As a former chairman he violated the zero tolerance policy of the by-laws and the constitution. As a result, he was declared incompetent and illiterate during his tenure as chairman. His repugnant actions include illegally and unilaterally sacking Fobana as Vice Chairman and Executive Secretary despite having no power to do so. With bribes from Fobana, he granted interviews to national television and newspapers. It has no marketing merit other than promoting itself. Moreover he was the mentor and mastermind of the dishonorable actions of GI Russell and Shibbir Ahmad. Zakaria Chowdhury Fobana also cheated artists and patrons. It is not surprising that the above mentioned two persons GI Russell and Shibbir Ahmed are in this so called convening committee. As they were officially and quickly expelled from Fobana for their illegal activities. There are widespread allegations of constitutional violations against them.
They embezzled thousands of dollars in the last Fobana conference and cheated Fobana members. There are several individuals and organizations listed under the so-called convening committee, who do not even know that they are in this fake convening committee. More importantly, these illegally formed convening committees are mostly composed of one-person firms, husband-wife firms, or business partner firms, and most of them do not even qualify as Fobana members.