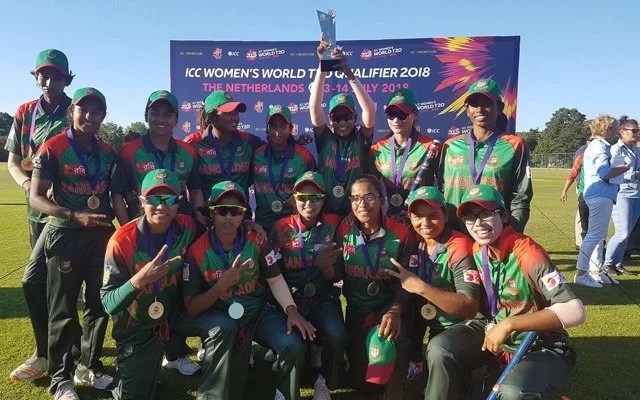 Banglapress Online: Bangladesh national women’s team on Saturday added a new feather to their hat as they became unbeaten champions of the ICC World Twenty20 Qualifier tournament by defeating Ireland by 25 runs in the final at Sportpark Maarschalkerweerd in Utrecht, Netherlands.
Put into bat first, Ayasha Rahman struck 46 off 42 deliveries to help Bangladesh to score 122-9 runs before Panna Ghosh claimed 5-16 to bowl the opposition out for 97 runs in 18.4 overs.
Set a modest target of 123 runs, Ireland batters never looked comfortable in their run-chase as they lost wickets at regular intervals.
Gaby Lewis and Eimear Richardson made 26 and 23 runs respectively but Bangladeshi bowlers kept their cool to avenge their defeat against same opponents in 2015 Qualifiers.
Unlike the spinners, who had orchestrated the wins in the previous matches, experienced Panna led Bangladesh’s bowling attack this time, picking up two wickets in her opening spell before completing her maiden five-wicket haul in Twenty 20 international.
She became only the second Bangladeshi bowler to accomplish the feat in Twenty20 cricket after Jahanara Alam, who claimed five wickets against the same opponents in the buildup of the tournament.
Spinners, however, played their part in the win as Nahida Akter and Rumana Ahmed chipped in with two wickets each for the current Asian champions.
Bangladesh got a steady start as the opening stand between Shamima Sultana and Ayasha added 28 runs before Shamima (16) was caught by Richardson off Lucy O’Reilly.
Ayasha smashed five fours and two sixes and added 52 runs in the second-wicket with Fargana Haque.
But Fargana’s dismissal on 17 came out as the major setback for Bangladesh as they lost six wickets within 26 runs.
Pacer O’Reilly picked up four wickets by giving away 28 runs for Ireland while spinner Ciara Metcalfe claimed 2-24.
Bangladeshi batter Jahanara Islam remained unbeaten for 12 off 11 deliveries while six of the other batters failed to reach two-digit score but the total was more than enough to take a comfortable victory at the end.
Bangladesh earlier managed to qualify for the main event of the forthcoming ICC World T20, scheduled to be held in West Indies in November for the third successive time, after defeating Scotland by 49 runs in the second semi-final on Thursday.