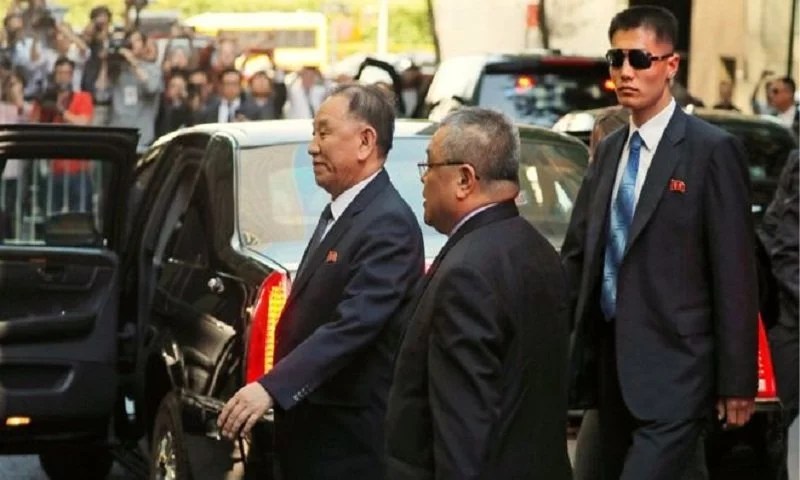 Banglapress Online: The right-hand man to North Korean leader Kim Jong-un has met US Secretary of State Mike Pompeo in New York to discuss a historic summit. Gen Kim Yong-chol flew in from the Chinese capital Beijing on an Air China flight. He is the most senior North Korean to visit the US in nearly 20 years. US President Donald Trump previously cancelled the 12 June summit but both sides have since made fresh efforts to hold it as planned. Scheduled to happen in Singapore, the historic meeting would be the first between sitting US and North Korean leaders.
What do we know of the first meeting?
On Wednesday evening, Mr Pompeo and Gen Kim began with a dinner at a building close to the UN headquarters. They arrived at the venue separately. Neither side spoke to reporters. Ahead of the meeting, Mr Pompeo had set out the US position. North Korea has strongly objected to statements by Trump administration members comparing North Korean denuclearisation to Libya’s.
Former Libyan leader Colonel Gaddafi gave up his nuclear programme only for him to be killed by Western-backed rebels a few years later.Further talks are planned for Thursday.
What other talks are going on?
Choe Son-hui, North Korea’s vice-foreign minister, is continuing to meet Sung Kim, a former US ambassador to South Korea, at Panmunjom on the border between the two Koreas.
These talks have been continuing since Sunday with some long breaks. The two diplomats have faced one another before during previous denuclearisation negotiations.
In Singapore itself, a US team led by Joe Hagin is thought to be meeting Kim Chang-son, the de facto chief of staff to the North Korean leader, to talk about logistics. And Sergei Lavrov, the Russian foreign minister, is due to arrive in Pyongyang on Thursday for talks. He and Mr Pompeo spoke on Wednesday for the first time, by phone.
White House spokesperson Sarah Sanders confirmed the US and North Korean leaders still planned to meet next month. “As the president says, if it happens, we’ll certainly be ready,” she said.