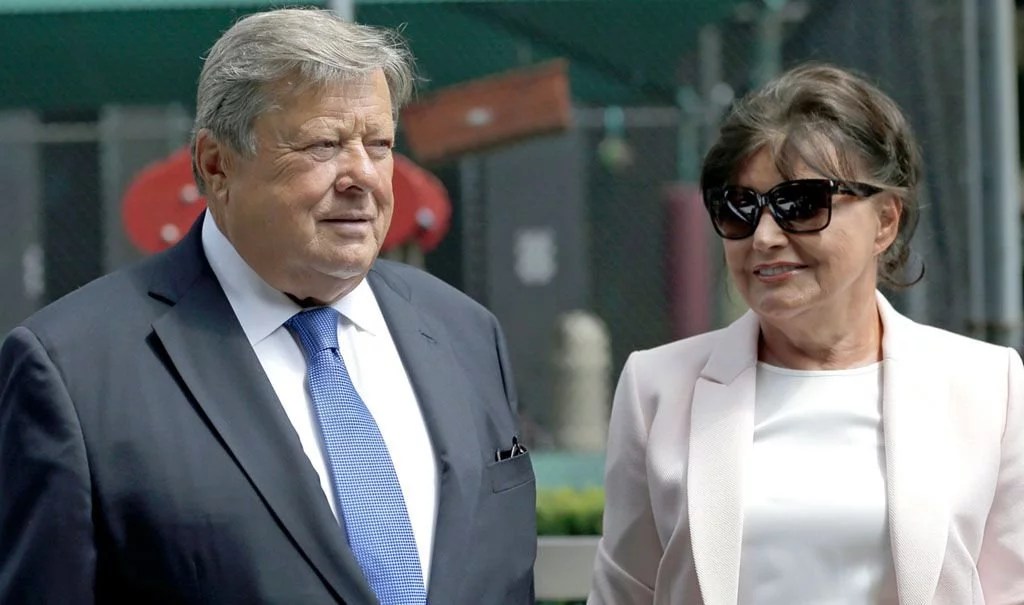 New York Correspondent: First lady Melania Trump’s parents were sworn in as US citizens on Thursday, completing a legal path to citizenship that their son-in-law has suggested eliminating.
Viktor and Amalija Knavs, both in their 70s, took the citizenship oath at a private ceremony in New York City. The Slovenian immigrants, a former car dealer and textile factory worker, had been living in the US as permanent residents.
First lady Melania Trump’s parents were sworn in on Thursday as U.S. citizens and their lawyer said if was done like everyone else who can apply after five years of having a green card. Jane Lanhee Lee reports.
The Knavses slipped in and out of a side entrance at a Manhattan federal building flanked by Department of Homeland Security police. Some workers inside didn’t know what was going on. The couple said little, other than Viktor telling a reporter “thank you” when asked how they felt about becoming Americans.
The Knavses’ lawyer said they had “travailed a wonderful journey.”
Lawyer Michael Wildes said the Knavses applied for citizenship on their own and didn’t get any special treatment. He confirmed that Melania Trump sponsored their green cards. Her husband, President Donald Trump, has proposed ending most family-based immigration, which he refers to as “chain migration.”
“This golden experiment, these doors that are in America, remain hinged open to beautiful people as they have today,” Wildes said after the ceremony.
Amid a bitter debate over immigration _ particularly the Trump administration’s separation of children from families crossing the border illegally — Wildes said the Knavses’ attaining citizenship was “an example of it going right.” Melania Trump, who has been vacationing with her husband in Bedminster, New Jersey, did not accompany her parents.
Her spokeswoman, Stephanie Grisham, declined to comment. She said the first lady’s parents “are not part of the administration and deserve privacy.”
Along with targeting illegal immigration, President Donald Trump has proposed sharply curbing legal immigration.
The Republican president proposed replacing most family-based immigration with a skills-based system after an attempted bombing by a Bangladeshi immigrant in New York last December. He also called for eliminating a visa lottery program for people from countries under-represented in the US
The plan, which Trump reiterated last week at a Wilkes-Barre, Pennsylvania rally, would limit immigrants like his wife to sponsoring only their spouses and underage children to join them in the US — not their parents, adult children or siblings.
Experts estimate those measures, so far resisted by Congress, would cut legal immigration into the US nearly in half. Wildes wouldn’t say how long the Knavses have lived in the US Under the law, permanent residents must live in the country for at least five years before applying for citizenship.
The Knavses’ citizenship ceremony was kept hush-hush around the Jacob K. Javits Federal Building. Security guards and US Citizenship and Immigration Services workers in offices adorned with President Trump’s portrait said they were unaware of anyone being sworn in there on Thursday. New citizens are normally minted on Fridays, they said, and often the ceremonies are held at the federal courthouse across the street.
The Knavses raised Melania, born Melanija, in the rural industrial town of Sevnica while Slovenia was under Communist rule. She attended high school in the Slovenian capital, Ljubljana, and changed her name to Melania Knauss when she started modeling.
She settled in New York in 1996 and met Trump two years later. They married in 2005. Viktor Knavs is 74, two years older than his son-in-law. Amalija is 73.
Trump hasn’t commented or tweeted about his in-laws’ newfound citizenship.
Around the same time the Knavses were completing the ceremony, he was tweeting his rage about the ongoing Russia probe (”an illegally brought Rigged Witch Hunt”) and his excitement about plans for a sixth branch of the military (”Space Force all the way!”). Reuters