6 killed, 24 injured in gun attack during an Independence Day parade in USA

6 killed, 24 injured in gun attack during an Independence Day parade in USA 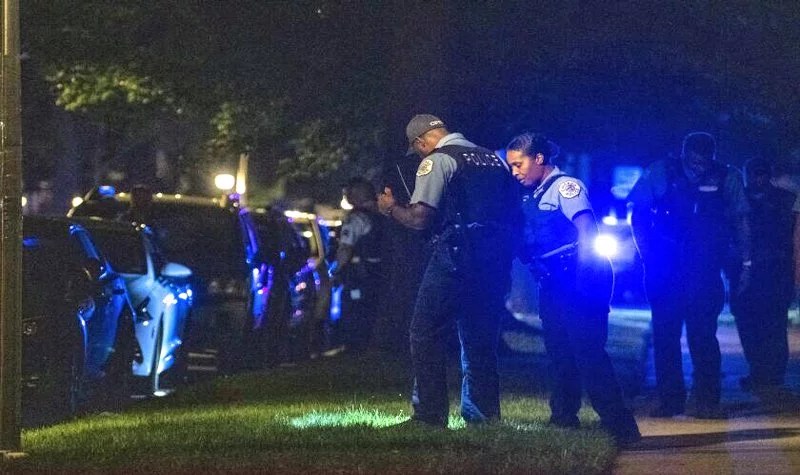 Minara Helen Eti: Six people were killed and more than two dozen others wounded when a gunman started shooting from a rooftop 10 minutes after the Highland Park Fourth of July parade kicked off Monday morning, authorities said.
Authorities continued to hunt Monday afternoon for the shooter, and the FBI asked that anyone who had video of the shooting or possible information about the shooter call their toll-free tipline at (800) CALL-FBI.
A Chicago Sun-Times reporter saw blankets covering three bloodied bodies and five other people wounded and bloodied near the parade’s reviewing stand.
NorthShore University Health System said 26 people were taken to Highland Park Hospital and five to Evanston Hospital, the “vast majority” being treated for gunshot wounds, though some “sustained injuries as a result of the ensuing chaos at the parade.”
Several witnesses said they heard multiple shots fired. One witness said he counted more than 20 shots. Miles Zaremski, a Highland Park resident, told the Sun-Times: “I heard 20 to 25 shots, which were in rapid succession. So it couldn’t have been just a handgun or a shotgun.”
Zaremski said he saw “people in that area that got shot,” including “a woman covered with blood . . . She did not survive.”
Police were telling people: “Everybody disperse, please. It is not safe to be here.”
As they fled the parade route on Central Street in downtown Highland Park, panicked parade-goers left behind chairs, baby strollers and blankets as they sought cover, not knowing just what happened. Even as people ran, a klezmer band, seemingly unaware of the gunfire, continued to play.
Police from Highland Park and several other jurisdictions, including the Illinois State Police, some armed with rifles, were patrolling the area, looking for whoever fired the shots.
“It does appear he was shooting from a roof,” said Chris Covelli of the Lake County sheriff’s office.
Highland Park police Cmdr. Christ O’Neill said that a rifle the gunman used has been recovered and that the suspect appeared to be 18 to 20 year old, white and wearing a blue T-shirt.
Adrienne Drell, a former Sun-Times reporter, said she was sitting on a curb along Central Avenue watching the parade when she saw members of the Highland Park High School marching band start to run.
“Go to Sunset,” Drell said she heard the students shout, directing people to nearby Sunset Foods.
A man picked her up off the curb and urged her to get out, Drell said. “There’s panic in the whole town,” she said. “Everyone is just stunned beyond belief.”
She ran across to a nearby parking lot with other people who had been watching the parade.
“It was a quiet, peaceful, lovely morning, people were enjoying the parade,” Drell said. “Within seconds, to have that peacefulness suddenly ripped apart, it’s scary. You can’t go anywhere, you can’t find peace. I think we are falling apart.”
Eric Trotter, 37, who lives blocks from the shooting, echoed that sentiment. “I felt shocked,” Trotter said. “How could this happen in a peaceful community like Highland Park.”
As police cars sped by on Central Avenue, sirens blaring, Alexander Sandoval, 39, sat on a bench and cried. He’d gotten up before 7 a.m. to set up lawn chairs and a blanket in front of the main stage of the parade. He lives within walking distance from there, so he went home to have breakfast with his son, partner and stepdaughter before going back for the parade.
Hours later, he said he and his family ran after hearing the gunfire, afraid for their lives.
“We saw the Navy’s marchers and float pass by, and, when I first heard the gunshots, I thought it was them saluting the flag and shooting blanks,” Sandoval said. “But then I saw people starting to run, and the shots kept going. We started running.”
He said that, in the chaos, he and his partner Amairani Garcia ran in different directions, he with his 5-year-old son Alex, she with her 6-year-old daughter Melani.
“I grabbed my son and tried to break into one of the local buildings, but I couldn’t,” Sandoval said. “The shooting stopped. I guess he was reloading. So I kept running and ran into an alley and put my son in a garbage dumpster so he could be safe.”
Then, he said he ran in search of the rest of his family and saw bodies in pools of blood on the ground.“I saw a little boy who was shot being carried away,” Sandoval said. “It was just terror.”
He found his partner and stepdaughter, safe, inside a McDonald’s nearby.“This doesn’t happen here,” he said. “It shouldn’t happen anywhere.”
Don Johnson, 76. who lives about two blocks from the shooting scene, thought at first the gunfire was a car backfiring. He said he ran with several other people to a nearby BP gas station and described the scene as “surreal.”
“It’s just a terrible thing,” he said. “I never wouldn’t thought this would’ve happened in downtown Highland Park.”
Johnson said his daughter lives in Chicago with her son and that he’s been urging them to move to Highland Park, telling her recently, “It’s safe.” Now, he said, it’s clear that “it can happen anywhere.”
Gov. J.B. Pritzker called on “all Illinoisans to pray for the families who have been devastated by the evil unleashed this morning in Highland Park, for those who have lost loved ones and for those who have been injured.
“There are no words for the kind of monster who lies in wait and fires into a crowd of families with children celebrating a holiday with their community. There are no words for the kind the kind of evil that robs our neighbors of their hopes, their dreams, their futures.
“We must — and we will — end this plague of gun violence.”
News of the shooting spree in Highland Park prompted other suburbs to cancel their Fourth of July celebrations.