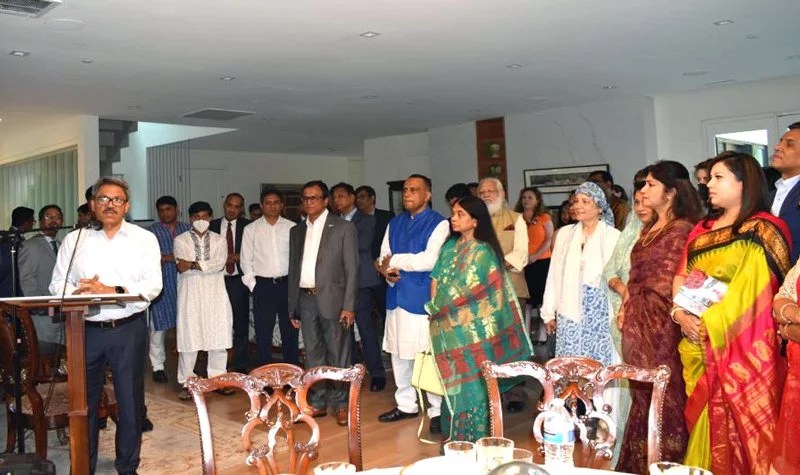 Staff Reporter: Eid reunion was held at the Bangladesh Embassy in Washington DC. On the occasion of Eid-ul-Azha, one of the most important religious festivals of Muslims, the chief guest of the Eid reunion program held at ‘Bangladesh House’ in Maryland on Friday (July 15) was Md Shahriar Alam, Minister of State for Foreign Affairs of Bangladesh. Md. Shahidul Islam, Ambassador of Bangladesh to the United States organized the event.

Ambassador Marcia S. Barnicutt, Director General of the US Foreign Service and Director of Global Talent, was present as a special guest on the occasion.
Diplomats of various countries, senior officials of the US Government and State Department and a significant number of expatriate Bangladeshis attended the event.

State Minister for Foreign Affairs Shahriar Alam in his speech mentioned the excellent relations between Bangladesh and the United States and expressed hope that these relations will be strengthened in the coming days. He said that the assistance that Bangladesh has received from the United States after independence is highly commendable. State Minister for Foreign Affairs congratulated everyone on the occasion of Eid-ul-Azha.
Former US Ambassador to Dhaka Marcia Barnicutt recalled her wonderful time in Bangladesh and expressed hope that the existing friendship and relationship between the two countries will always remain. Ambassador Shahidul Islam thanked the guests for attending the Eid Reunion event.