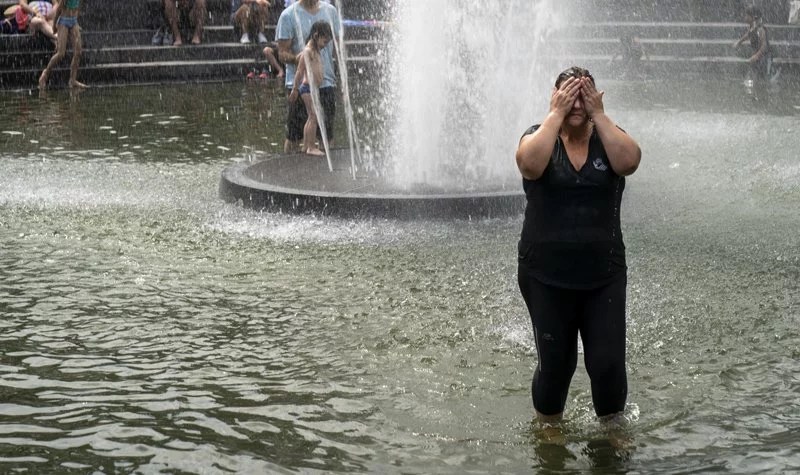 Noman Ibne Sabit: The normal way of life has been disrupted in the northeastern part of the United States due to severe storms. The National Meteorological Service said that this condition will prevail for another 3 days, till Sunday, July 24.
An average of 370 heat-related deaths occur each year, which is about 2 percent higher in summer than in other seasons, according to the U.S. Annual Data Report.

On Wednesday, the temperature was around 100-106 degrees Fahrenheit in various states of the United States, especially New York, New Jersey, Pennsylvania, Massachusetts, Connecticut, Vermont, Rhode Island, New Hampshire and Maine, and this temperature will rise to 96 degrees Fahrenheit next Sunday, and any Temperatures can sometimes exceed 100 degrees Fahrenheit. Melissa De Spigna, a meteorologist at the National Weather Service, said Wednesday and Thursday will be the hottest days in New York City, when temperatures and humidity will leave people gasping.

The same will prevail in Boston, Philadelphia and Washington DC. The city authorities have started setting up cooling centers for the common people in the city’s air-conditioned government buildings from last Tuesday, which will continue till Thursday of next week, to relieve the people suffering from the heat.
Health Commissioner Dr Ashwin Bhasan said, ‘As we continue our recovery from Covid-19, we must remain committed to addressing the health impacts of a changing climate and warming planet, the impacts of which cannot be borne equally.’ New Yorkers stay cool by using air conditioning, visiting a cooling center or going to some other cool place where they feel comfortable. He advised to go there. He also asked to take care of each other by contacting friends, family, acquaintances and neighbors.
New York City Cooling Centers Cooling centers are located in public libraries, community centers, senior centers, City Housing Authority facilities, the locations of which can be found by visiting the ‘Location Finder’ on the City’s website. 12 cooling centers have also been set up in Boston, which will be open to the public from 9 am to 5 pm. A number of cooling centers have also been set up in Washington DC. The extreme heat has caused many flight delays at JFK Airport, LaGuardia Airport and Newark Airport. The average delay time ranges from half an hour to 100 minutes.