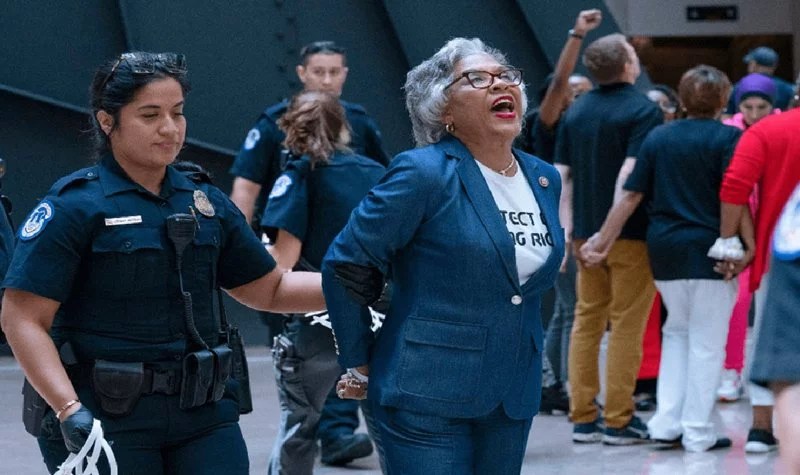 Noman Ibne Sabit: A total of 35 people, including 17 Democratic lawmakers, were arrested while protesting outside the Supreme Court on Tuesday. The group was demanding federal abortion protections.
Arrested lawmakers are: Rep. Alexandria Ocasio-Cortez, D-N.Y,Rep. Alma Adams, D-N.C,Rep. Andy Levin, D-Mich,Rep. Ayanna Pressley, D-Mass,Rep. Barbara Lee, D-Calif,Rep. Bonnie Watson Coleman, D-N.J,
Rep. Carolyn Maloney, D-N.Y,Rep. Cori Bush, D-Mo,Rep. Ilhan Omar, D-Minn,Rep. Jackie Speier, D-Calif.
Rep. Jan Schakowsky, D-Ill,Rep. Katherine Clarks, D-Mass,Rep. Madeleine Dean, D-Pa,Rep. Nydia Velazquez, D-N.Y,Rep. Rashida Tlaib, D-Mich,Rep. Sara Jacobs, D-Calif,Rep. Veronica Escobar, D-Texas
The demonstrators were arrested after refusing to leave the street and three warnings from Capitol police.
“We will not stop fighting,” said Cori Bush, who represents Missouri. “This is not just for us now, this is for our legacies, this is for our children’s children.”
A Missouri trigger law made abortions illegal following the Supreme Court’s decision to overturn Roe v. Wade. The state law makes no exceptions for rape or incest.
“So many of our constituents have been reaching out to us afraid,” Bush said.
Despite push back from Republicans, California lawmaker Jackie Speier said their march from the steps of the Capitol was necessary to get their message out.
“We refuse to go back under any circumstances,” Speier said.
In the weeks since the ruling, Senate Republicans have blocked Democrats’ efforts to grant abortion rights nationwide or extend legal protections to women who cross state lines for abortion services.
Sen. Josh Hawley, R-Mo., said the Democrats’ calls are out of step with the public.
“After the Supreme Court’s decision, the people of Missouri get to write their own laws,” Hawley said. “They want to impose an agenda that is favored by than less than 10% of the population, it is an abortion on demand, abortion up to ninth month of pregnancy.” Despite the gridlock, Bush and others are vowing to keep up the fight.