Demonstration of expat for Bangladeshi student shot dead by US police

Demonstration of expat for Bangladeshi student shot dead by US police 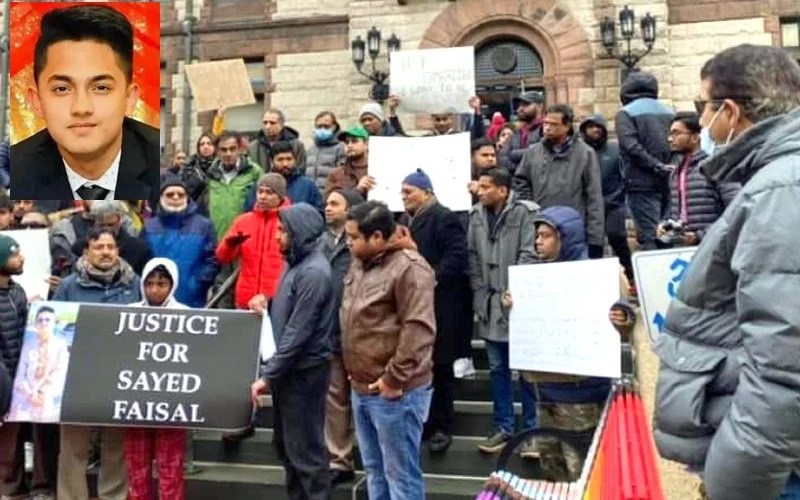 Noman Sabit: Bangladeshi expatriates in Boston and Cambridge have held a protest against the death of a Bangladeshi student in Cambridge, Massachusetts, USA. In the protest rally held in front of Cambridge city hall on Thursday (January 5) noon local time, expatriates demanded exemplary punishment for the police who shot and killed Bangladeshi origin student Sayed Faisal alias Arif. At the same time, they demanded the concerned city authorities to ensure the safety of the migrants.

Last Wednesday (January 4) at noon, Bangladeshi-origin student Sayed Faisal alias Arif (20) was shot by the police in Cambridge and he lost consciousness on the spot. Sayed Faisal died in the evening after being rushed to Massachusetts General Hospital in Boston by ambulance. However, the police claim that Sayed Faisal saw a long knife in hand and asked him to put it down. But he was running straight towards the police so the police shot him.
When this incident spread among the expatriates in Boston and neighboring area within moments, the expatriates erupted in protest. Hundreds of expatriates gathered in front of Cambridge city hall on Thursday (January 5) afternoon to demand exemplary punishment for the guilty police involved in the killing of Sayed Faisal. Expatriates of various professions from Boston and Cambridge and neighboring areas participated in the gathering. At this time, the area was filled with slogans of ‘We Want Justice’.
Speakers in the rally said, We cannot accept the killing of the innocent Bangladeshi student Sayed Faisal alias Arif by the police. Due to the tragic death of Faisal, the only son of his parents, his family has become helpless. We do not know the language to comfort them. Therefore, the expatriate speakers demanded exemplary punishment by immediately bringing the guilty policemen under the law.

Cambridge City Mayor Sumbul Siddiqui and Councilman Burhan Azeem have promised to sit down and discuss with Bangladeshi community leaders, New England Bangladeshi American Foundation (NEBAF) officials said. They will be discussing with the district attorney and police commissioner very soon at the initiative of the Cambridge city mayor and councilmen, Niebuff said.
It is said that the country house of the deceased Syed Faisal alias Arif is in Fatikchari of Chittagong. Studied at University of Boston (UMass). Almost all of his family lived in Boston.