Sabitree Roy: Officials of the Federation of Bangladeshi Associations in North America (FOBANA) have urged Bangladeshis to be cautious by issuing a new warning about 6 expatriates in the United States. The warning was issued by the central executive committee of the organization last Sunday (January 8).This information was informed in a press release signed by Fobana’s current committee chairperson Dr. Ahsan Chowdhury Hero and Executive Secretary Nahidul Khan Sahel.

Officials of FOBANA mentioned in the press release that our attention has been drawn to the news related to FOBANA published in some newspapers recently and to remove any confusion about Federation of Bangladeshi Associations in North America (FOBANA) the following press release is published. 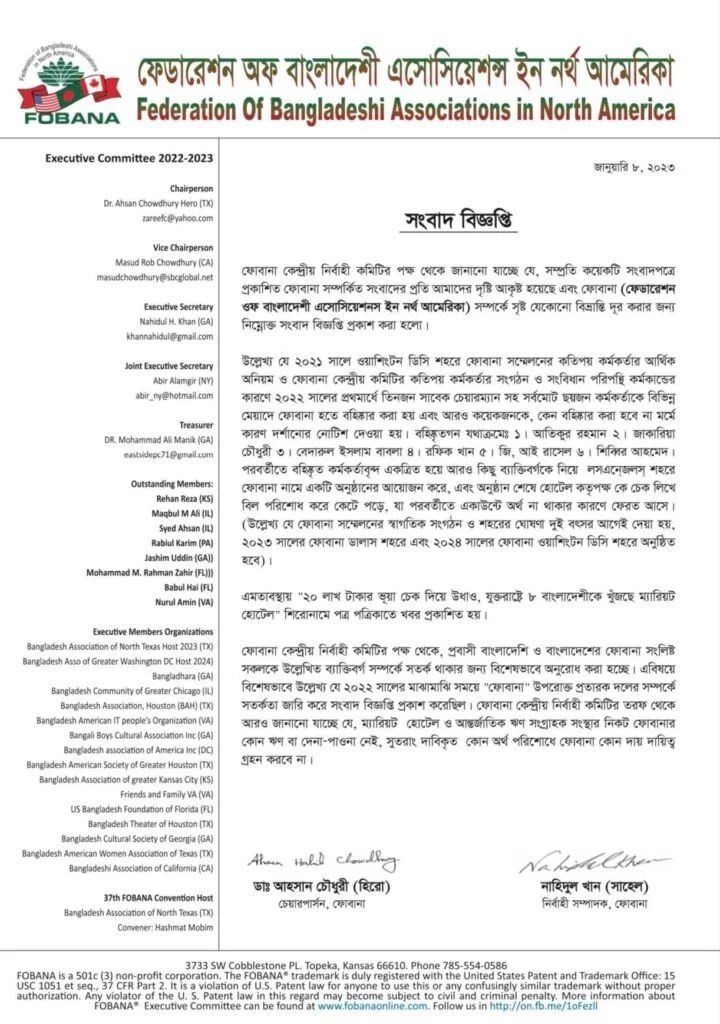 In the year 2021, due to the financial irregularities of some officials of Fobana conference in Washington DC city and the organization and unconstitutional activities of some officials of Fobana Central Committee, in the first half of 2022 three former chairman and then three more were expelled from Fobana for different periods and why will not some others be expelled. A show cause notice is issued accordingly. Those expelled from Fobana are Atiqur Rahman, Zakaria Chowdhury, Bedarul Islam Babla, Dr. Rafiq Khan, GI Russell and Shibbir Ahmed.
Later, the outcasts got together with a few other people to organize an event called Fobana in the city of Los Angeles and after the event wrote a check to the hotel authorities and paid the bill, which was later returned due to lack of money in the account. (Note that the host organization and city of the FOBANA conference are announced two years in advance, with the 2023 FOBANA being held in Dallas, TX and the 2024 FOBANA in Washington DC). In this situation, news was published in the newspaper under the title ‘Marriott Hotel is looking for 8 Bangladeshis who disappeared with a fake check of Tk 20 lakhs in the United States’.
On behalf of FOBANA Central Executive Committee, the officials of FOBANA called upon Bangladeshi expatriates and all those associated with FOBANA in Bangladesh to be careful about the mentioned individuals.
It is particularly noteworthy that in the middle of 2022, FOBANA officials issued a press release warning about the said fraudulent group. Fobana Central Executive Committee mentioned that Fobana does not have any debt or debt with Marriott Hotel and International Debt Collectors, therefore Fobana will not take any responsibility to pay any amount claimed.