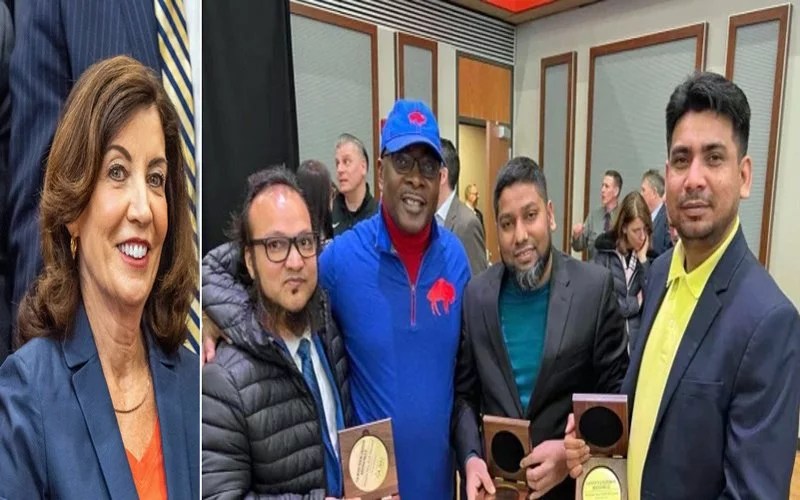 Noman Sabit:Two Bangladeshis and a Bangladeshi organization have been awarded ‘Tusharjhar Nayak’ (Blizzard Hero) for taking part in the rescue work at the risk of life in Buffalo, New York, USA. New York State Governor Kathy Hockul presented the award at the Campbell Student Union Hall of the State University of New York in Buffalo City on Saturday (January 21) at noon local time.

A group of Bangladeshis took part in the rescue work risking their lives in the last week of last December in Buffalo City, New York. Two of them, Md. Tajul Islam Manik and Mohammad Osman Shimul, were awarded The Governor’s Medal of Public Service as ‘Tusharjhar Nayak’ or Blizzard Hero for their heroic contribution.
At the same time, Bangladeshi-owned Lovebirds Restaurant in Buffalo City was honored in the institution category for its important role in the post-blizzard period. Mohammad Alam, one of its owners, accepted this honor on behalf of the company. Buffalo City Mayor Byron Brown was present at the event.

It should be noted that at least 28 people died in the terrible snow storm that swept through Buffalo last December. The New York state government declared a state of emergency.