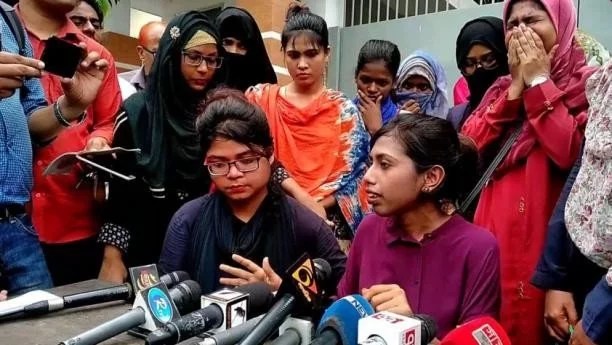 Banglapress online: A female student, who participated in the ongoing quota reform movement, today shared her horrific experiences of physical assault, verbal abuse and mental tortures allegedly inflicted by activists against quota reform movement and policemen.
Mariam Mannan Farah, a first year honours student of Political Science department at Tejgaon College, narrated her experiences at a press briefing on the premises of Rokeya Hall on Dhaka University campus this noon.
“When I got into a CNG-run auto-rickshaw to return to my residence, around two hundred boys on motorbikes intercepted me near the Shaheed Minar. I was scared as they snatched my cell phone and purse and started shoving me,” Mariam said.
“They hurled abusive words at me which I cannot utter. They entered the vehicle and touched me. Every moment inside the CNG seemed to be in hell.”
“Then they took me to Shahbagh Police Station. I thought I would be safe there, but it was no different. Just after going there, they (police) brought out a knife from my bag. They called me a prostitute and tried to make me confess to being a yaba addict,” she said.
“I had only a water bottle and two makeover kits inside my purse. Why should I bring in a knife? I told police that the boys took away my purse. I was not carrying a knife. However, they were inflicting mental torture on me to manufacture confession from me. They even tried to undress me saying that I became a national heroine as my picture went viral in the social media.”
The incident took place on Monday, July 2, soon after Faruk Hasan (joint convener, Bangladesh Sadharan Chhatra Odhikar Sangrakkhan Parishad) was snatched away allegedly by a group of BCL men after they swooped on students staging a demonstration demanding quota system reform in the civil service at DU campus.
Mariam also said that she intentionally joined the quota reform protests as she thinks she has rights to do so, adding that she did not know Faruk Hasan personally.
“As a fellow human being, I went inside the crowd to save him. You (reporters) saw exactly what happened to me after going there. Now what should I say? Should I say exactly where they touched me and what they did to me?”
Replying to query about the identities of those boys, she said they were just boys as she does not know whether they belonged to Bangladesh Chattra League (BCL), the student front of the ruling party.
“Why should I say they were BCL men when I don’t know who they were?” she asked.