Expats are angry over the activities of Bangladeshi doctors in USA!

Two conferences on same day in New York
Expats are angry over the activities of Bangladeshi doctors in USA! 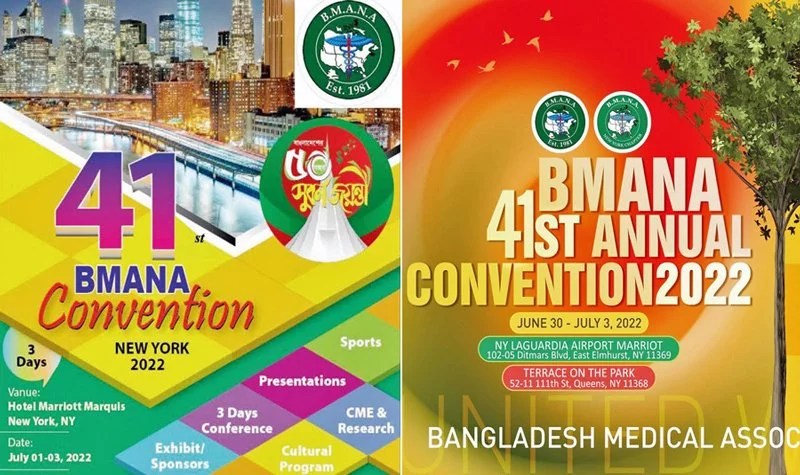 Noman Ibne Sabit: Eventually, the Bangladesh Medical Association of North America (BMANA), a professional organization of Bangladeshi doctors in North America, broke up due to a leadership dispute. The two groups held two separate conferences on the same day over the weekend of Independence Day in the United States (July 4). The two conferences were held at the Hotel Marriott in Manhattan, New York City, and the Laguardia Airport Marriott. Extreme anger is prevailing among the expatriates including Bangladeshi doctors in this incident.

It is learned that in connection with the two separate conferences of the two groups, the concerned people have been extorting money from various businessmen in the United States for a long time, especially from homecare businessmen. Ordinary members complain that no doctor spends their own pocket money for such conferences. The conference was funded by various sponsors. There are allegations that many doctors of the organization are openly trading fake patient certificates with homecare traders. Not only that, many doctors are known to be involved in various criminal activities in the United States and Bangladesh. As these incidents were leaked to others, there was division among the officials of the organization.

The 41st BMANA conference also raised questions about the quality of the two. They have always spent a lot of money to introduce the subculture to the new generation in the name of cultural programs with low quality artists. Earlier, it was seen that the wives of Bangladeshi doctors wife’s danced in an obscene manner by shaking their waists to the tune of playing foreign foreign songs. This year’s two conferences were no exception. The United States is causing a storm of criticism among Bangladeshis.
The general members are embarrassed about the two 41st BMANA conferences. A part of the organization finalized the organization of the 41st BMANA conference at the Marriott Marquis Hotel in Manhattan. The three-day conference runs from July 1 to 3. This year’s conference is a joint initiative of local physicians in New York and the executive committee of the central BMANA. Most of the doctors are reported to have attended the conference. Both big budget conferences were luxurious.
BMANA, on the other hand, hosted the 41st conference at the Marriott Hotel in Laguardia, New York. BMANA New York Chapter is the organizing organizer of this conference. The three-day conference runs from June 30 to July 3. According to the organizers, a large number of doctors from different cities of the United States have participated in this year’s conference.

The position of Bangladeshis living in the United States has always been at the top of the list of perfect artisans to break the organization. Here the organization is formed as fast and like a frog’s umbrella, it breaks down for no reason. There are multiple divisions in almost all organizations including social, regional, political, cultural, professional. Professional organizations are not out of it. American Bangladeshi engineers, agriculturists, journalists and other professional organizations are also divided. The rest was the Bangladesh Medical Association, an organization of doctors. Eventually this organization also broke up. The BMANA has been in turmoil in recent years due to mutual rivalries, personal jealousy and leadership quarrels. The central BMANA is clearly divided into two sections on various issues. Confusion and weeping reached such a stage that they got involved in lawsuits several times over the organization’s funds and elections. Complaints counter-complaints reach dimensional levels. The split surrounding the 40th conference last year was much more final. A number of ordinary members have commented that this year’s 41st conference was the official inauguration of the BMANA. Such a breakdown of a reputable professional organization is not something many can easily take for granted. Some people are worried about which of the two conferences of the same name will be held in the same city.
Bangladesh Medical Association of North America or BMANA is a professional organization of expatriate Bangladeshi doctors in the United States. The organization was born in Michigan in 1981 at the initiative of a group of doctors with a vow of non-profit, non-political, education and service. Over time, BMANA has established 18 branches across the United States. The central BMANA organizes a national convention every year. Four decades after its founding, by 2021, 40 conferences have been held in 37 cities across the United States. Through these conferences, the opportunities for mutual friendship and harmony between the expatriate doctors and their families were opened. Besides, activities on education, culture, social and humanitarian aspects were conducted.
The organization also has a fund to provide financial assistance to distress and misery in the country and abroad. In addition, BMANA has been helping Bangladeshi-American doctors to increase their skills, albeit to a limited extent, and to help young people from their homeland seek medical care.
But there is a barrier to membership in the organization. Physicians registered with the Bangladesh Medical and Dental Council can be members of the Bangladesh Medical Association in Bangladesh. The exercise of the right to vote preserves the right of the officer to be elected. Although the Bangladesh Medical Association is a North American-style organization, the walls of discrimination are lifted from the outset. Membership opportunities are open only to practicing physicians in North America. There was dissatisfaction among non-practicing and even many practicing physicians on this issue. That’s why BMANA has always had thousands of members, despite having more than 3,000 physicians in the United States. The overall activities of the organization also revolved around a boundary. Due to these reasons, the organization has not yet developed a minimum involvement with the new generation of doctors of Bangladeshi descent.
The grievances of the general members are that the tendency to retain the leadership of the elites in the organization, self-centeredness and latent political ambitions have made the BMANA increasingly contentious and contentious. The controversy over the leadership of the New York Chapter in particular took on extreme proportions. The controversy over the membership of the constitution fed the creation of another parallel organization outside the original BMANA.
The Texas Conference last year introduced partial amendments to the membership rules. The new amendment creates opportunities for one-class non-practicing physicians to become members as well as executives.
Meanwhile, the BMANA is facing a final breakdown as it does not address the issue of class discrimination among Bangladeshi doctors. The organization was embroiled in a long-running dispute over leadership, quarrelsome interests, and personal precaution.
The general members are angry at the division of this organization, which is elite and professional. They believe in one and the same BMANA at any cost. They are reluctant to accept such a catastrophe of the organization due to the personal interests of some doctors.
Meanwhile, there has been a major complication with the use of split BMANA names and tax IDs. Both parts of the divided organization are using the same name and tax ID. This process has been going on for the last one year. The transaction is thousands of dollars. Some of the divided BMANA have filed tax returns as per the rules, but some have raised the question of transparency and immorality through social media. They fear that the way a non-profit organization is doing this by evading the IRS could endanger the organization.