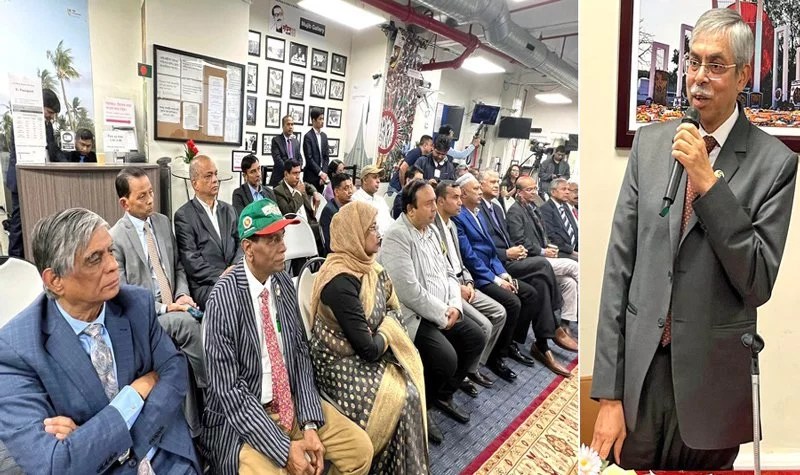 Minara Helen: Many questions have been raised about the familiar guests who regularly travel to the Bangladesh Consulate General Office in New York and Bangladesh Permanent Mission to the United Nations. Last Saturday (November 12) in the evening of Bangladesh’s new ambassador in Washington DC Muhammad Imran’s discussion meeting with expatriate media workers and social leaders seeing the presence of the so-called familiar guests including party leaders, various questions arose among the Bangladeshi expatriates in the United States.
When Bangladesh is on the verge of a dire financial crisis. Dollar reserves continue to shrink. The Prime Minister herself is giving early warning of famine with calls for reduction of state expenditure. At the same time, a separate dinner was arranged in the Bangladesh Consulate General office in the name of a discussion meeting with the ambassador. So-called social leaders and expatriate media workers participated in it. Not only in the Bangladesh Consulate General office in New York, such a scene can be seen in various events of the Bangladesh Permanent Mission appointed to the United Nations. There is a storm of discussion going on everywhere in New York.
Muhammad Imran assured reporters that the government and the embassy would take necessary measures to provide maximum service to the expatriates and said that the doors of his embassy are open for all expatriates. Besides, he sought the overall cooperation of expatriates irrespective of party affiliation to show the country’s image to foreigners.
He said that the Bangladesh of 1971 and today’s Bangladesh are not the same. In the fifty years of independence, the country has seen a lot of development and progress. This development and progress should be presented to the foreigners as well as the image of the country. That is why all expatriates have to fulfill the duty of an ambassador above the party.
This was his first interaction with journalists and community leaders since he was appointed to the US last September. Earlier, the ambassador interacted with CEOs and presidents of various money transfer institutions at the consulate. At this time, he emphasized on sending more money to the country of expatriates in a legal way and took opinions about the actions of consulates or embassies.
Consul General of Bangladesh in New York. A ZM Sajjad Hossain, Minister (Press) of the Bangladesh Embassy in Washington DC, Noor A Elahi Meena, Minister (Press) appointed to the Bangladesh Permanent Mission to the United Nations and Debashree Mitra, President and Chief Executive Officer of Sonali Exchange Inc. were present in the discussion meeting moderated by Consul General of New York Dr. Monirul Islam.
Meanwhile, for the past few years, the Bangladesh Consulate General office in New York has been holding various events every month. It has cultural programs and dinner arrangements. In these events, party leaders and workers are always invited to the so-called well-known guests. Their faces can be seen at every event. Although there are 8 states under the jurisdiction of the Bangladesh Consulate General in New York, no guests from the remaining 7 states are invited to any event. Even the presence of dignitaries and eminent persons of these states has not been observed even today. Not only that, similar activities are also going on during cultural events. Talented artists and artisans scattered throughout New Jersey, Massachusetts, New Hampshire, Maine, Connecticut, Rhode Island and Vermont are never invited. Only two cultural organizations in New York, Bangladesh Institute of Performing Arts (BIPA) and Bangladesh Academy of Fine Arts (BAFA), perform without responsibility. Expatriates believe that the Bangladesh Consulate General in New York has signed a hundred-year agreement with these two organizations.